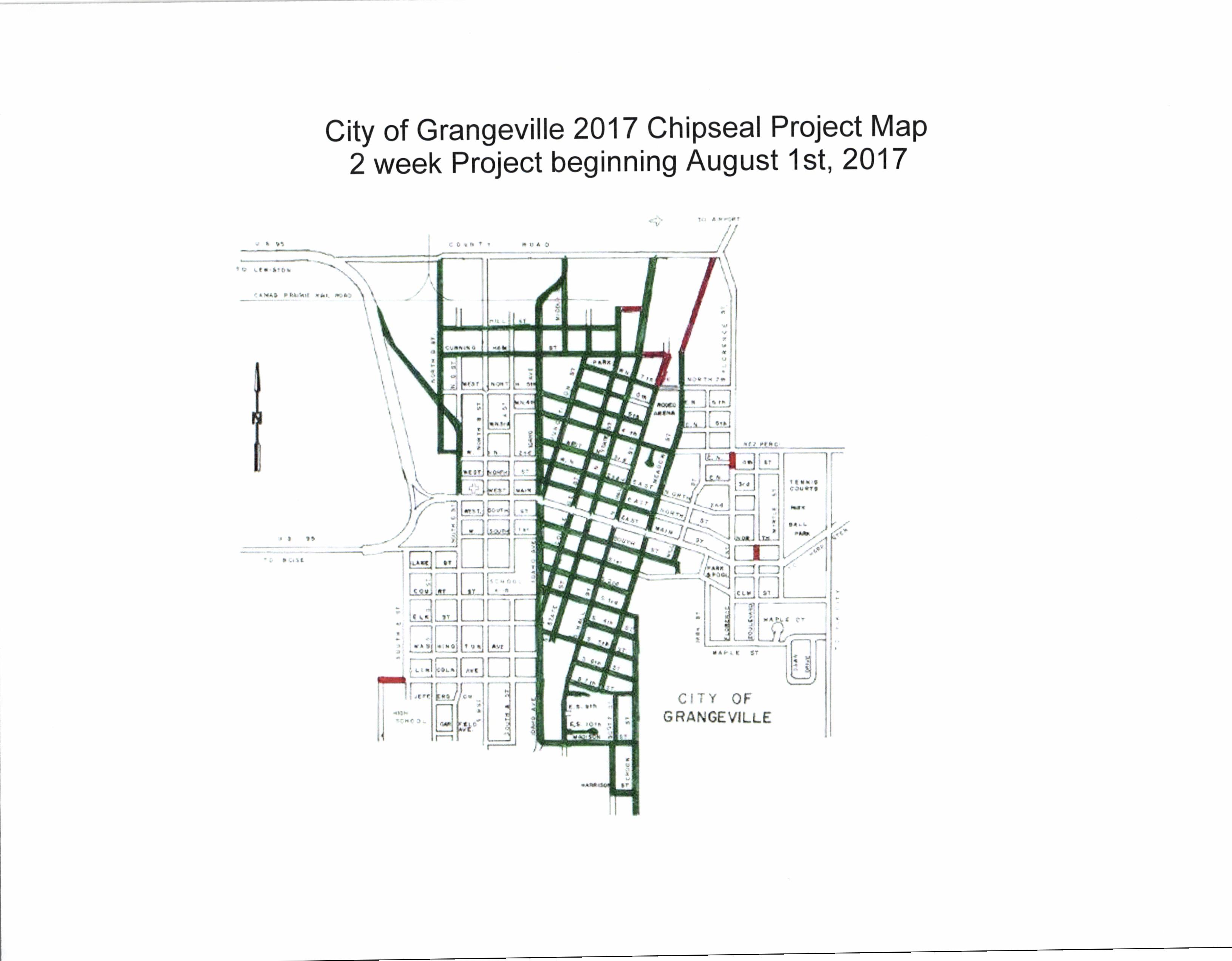 The green areas of the map below reflect the 2017 Chip Seal Project.  If you have questions, please contact the City, 983-2851.

MINUTES: The meeting was called to order and the minutes of June 5th were approved as presented by Councilman Peterson, second by Councilwoman Grant. Motion carried by a unanimous vote of the Council present.

AMENDMENT: On motion by Councilman Lester seconded by Councilman Peterson to add a request from the Quilt Shop to hang a banner advertising October fest, the quilt walk and the art show from August 28th – September 30th. Motion carried by a unanimous vote of the Council present.

Jinny Cash with the Veteran’s Outreach was present to provide an update. They have the Vietnam Veterans Recognition Day set for June 25th. She asked if Mayor Walker would come between 1-2:15 PM. Jinny requested to block off South Mill Street in front of the center during the day, via Chief Drew it was approved. She also asked if they could contact Bob Mager the Fire Chief to get the Christmas truck to park out front of the Veteran’s Center.

COMMITTEE REPORTS: The department had 33 cases written, 31 citations, 5 written warning and 105 calls for service for May 2017. The Police and Animal Control Report was accepted on motion by Councilman Peterson second by Councilwoman Winkler. Motion carried by a unanimous vote of the Council present.

GRANGEVILLE YOUTH BASEBALL CONCESSION STAND LEASE: The Council discussed the revised lease which stated the stand could be subleased to a non-profit only organization. Mayor Walker made it clear he does not feel that the city should be allowing people to sublease to for-profit vendors as it is against city policy to have people selling, especially for-profit, on city property. Councilman Lane stated he didn’t feel the community knows the snack shack needs to be ran by outside entities and maybe a non-profit doesn’t realize they could be running it. He said he feels it’s not fair to just contact one vendor when others could be interested during the Youth Baseballs season. Councilwoman Farris, a Youth Baseball committee member, stated Youth Baseball had reached out to non-profit and other for-profit vendors and no other vendor wants to participate. The current leasers are the only ones willing to come in and do it. She stated in the past when they have tried to run it on a volunteer base, no one volunteers. Mayor Walker stated maybe they should let the snack shack close due to no volunteers for a year and that would push people to volunteer if they want it open. Mayor Walker stated the City has never let people sell on city property in the past and doing this would open up the city for bigger issues in the future. Councilwoman Grant stated the City leases the snack shack to the Grangeville Youth Baseball and it’s up to them to do what they need to. The City doesn’t micromanage other leases on who they can or cannot sublease to, so why should the City do it with Youth Baseball? She pointed out the City has a lease with Boarder Days in regards to the city rodeo grounds and we don’t tell them who they can and cannot sublease to. Councilwoman Grant also stated we allow for-profit to sell on city property during special events such as Boarder Days in Heritage Square along with in Pioneer Park during Art in the Park. Grangeville Youth Baseball is a special event and should be allowed to sublease during that specific one month period.

Councilman Lane made a motion to have the sublease advertised and put out for bid, first for non-profit vendors. If no bids are received, then allow bids for for-profit food vendors for the snack shack. Motion died for lack of a second.

Councilman Lester wanted to know who would monitor this, how a Grangeville business would be defined and who would pay for publication. Councilman Winkler, Lane, Peterson voted yes. Councilman Lester, and Councilwoman Grant and Farris voted no. Mayor Walker broke the tie voting no. Motion failed.

BILLS: The bills, in the amount of $217,791.39 were approved and ordered paid out of their respective funds, on motion by Councilman Lester, second by Councilman Peterson. Motion carried by a unanimous vote of the Council present.

BANNER: The Quilt Shop wanted to hang the banner advertising Octoberfest, the quilt walk and the art show from August 28th – September 30th. Councilman Lester said that the Farmer’s Market banner dates were conflicting. The Council wants the Quilt shop to work together with Farmers Market and come to an agreement on dates and then return to the Council with an updated request.

LAND DONATION: Mayor Walker made a statement that the land donation is currently on hold because of the transfer process. While the City is happy that the community has so many ideas on what to do with the land, the City won’t be doing anything with it for some time. At this time the City isn’t going to commit to anything or have discussion over land use because it will take some time before the transfer will be finalized.

Read and/or approve minutes of the June 5th meeting

1. Banner request from Jodi Hoogland to hang a banner advertising Octoberfest, the quilt walk and the art show from August 28th-September 30th.

a. Proclamation proclaiming June 25, 2017 Vietnam Veterans Recognition Day in the City of Grangeville

Any person needing special accommodations to participate in the above noticed meeting should contact the City of Grangeville at 983-2851.